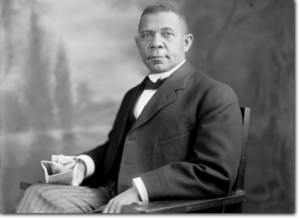 Washington on charity. To date, in all my knowledge of biographies I have not found one such as Booker T. Washington that had turned Ayn Rand’s orthodoxy into orthopraxy in such a practical way long before Rand penned her first objectivist sentence. Should he have read Atlas Shrugged I believe he would have found much in common with her logic.

My experience in getting money for Tuskegee has taught me to have no patience with those people who are always condemning the rich because they are rich, and because they do not give more to objects of charity. In the first place, those who are guilty of such sweeping criticisms do not know how many people would be made poor, and how much suffering would result, if wealthy people were to part all at once with any large proportion of their wealth in a way to disorganize and cripple great business enterprises…Very few people have any idea of the amount of money given away by persons who never permit their names to be known. I have often heard persons condemned for not giving away money, who, to my own knowledge, were giving away thousands of dollars every year so quietly that the world knew nothing about it. (Up from Slavery p. 182)